Since the Budget night we have been in a holding pattern waiting to see if the proposed changes would become a reality. After considerable debate and deliberation the Government has now appeared to have finalised its grand plan for superannuation moving forward. As a consequence of yesterday’s announcement we felt that it would be worthwhile summarising the changes and provide some commentary on what it means to you.

The major change revolves around the Non Concessional Caps. The original Budget proposal was to impose a lifetime non concessional cap of $500,000. Perhaps the most offensive part of this lifetime cap was that it was going to be retrospective to 1 July 2007.

The good news from yesterday is that this proposal has been scrapped. Moving forward the rules relating to Non Concessional Caps will  be as follows:

+  you can make non concessional contributions in the 2017 financial year of up to $180,000 (provided that you have not utilised the Bring Forward rule since 1 July 2014)

The qualifications or restrictions to the above are as follows:

+  If 65 or over, you must satisfy the work test.  That is, you must be gainfully employed for reward for at least 40 hours in a 30 day consecutive period before making the contribution.

Under the new proposals planning becomes even more important.  An example of this is as follows:

Assume we are in the 2018 financial year, your superannuation balance is $1.45m, you are 64 years of age and you have received an inheritance of $0.5m.  Under the proposed changes:

But, how much can you put in?  Based on the current proposals you could only contribute $200,00 instead of $300,000 using the Bring Forward rule.  This is because individuals with balances rearing the $1.6m cap will only be able to bring forward annual non concessional contributions for the number of years that would take their balance to $1.6m.

The 2017 financial year is the last year using the existing rules and caps.  The current annual cap for non concessional contributions is $180,000 or $540,000 if you fully utilise the Bring Forward rule. 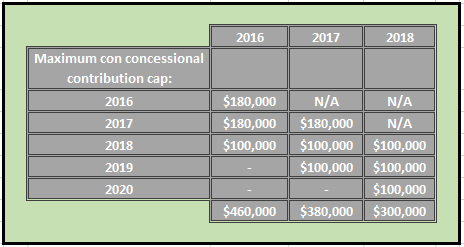 The original Budget proposal was to remove the work test for individuals aged between 65 and 74.  This was a welcomed change.  Unfortunately, the proposal to remove the Work Test has been dumped.

The work test requires an individual to be gainfully employed for reward for at least 0 hours in a 30 day consecutive period before being eligible to make a contribution to superannuation.

The commencement date for this change has been pushed back one year from 1 July 2017 to 1 July 2018.

Apart from the fact that the start date has been pushed back to 1 July 2018, this is a positive change.  It will especially aid individuals who crystalise a capital gain early in their retirement years.  Hence, the timing of crystalising a capital gain will be considered with the individual’s ability to make a ‘catch up’ concessional contribution.

The Budget proposals that the government has elected to remain unchanged as part of their review are as follows:

+  $1.6m transfer cap for tax free earnings in pension phase and the need to reduce pension balances to this threshold by 1 July 2017

+  ability to claim a tax deduction from concessional contributions without having to satisfy the “10% test”.  **This is important as it presents planning opportunities for individuals who were previously restructured because their employment income was more than 10% of their total assessable income.

Once all of the measures have been legislated, it would be opportune to meet to discuss opportunities that the proposals will create as well as how to work with some of the negative changes.

The comments are closed.